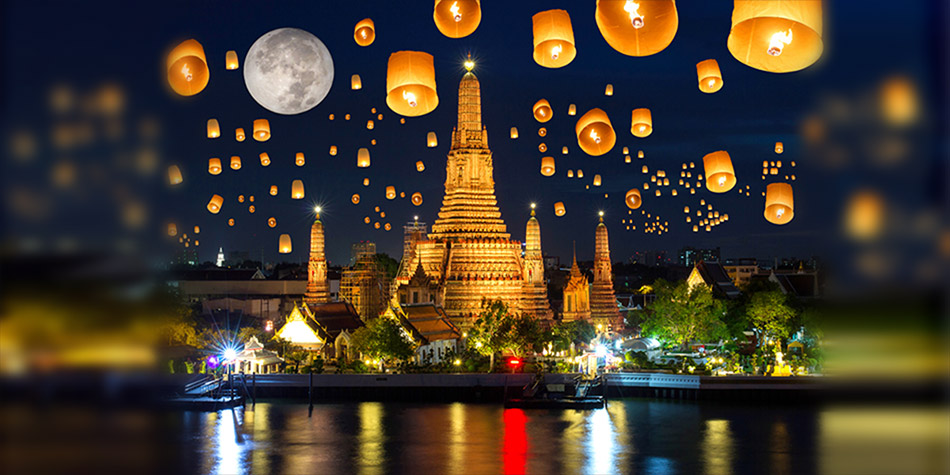 New Year’s Day activities from public celebrations. Popular to exchange gifts with each other And traveled to visit elders Including preparing food to celebrate together with the family Including organizing a party when it comes to New Year’s Day, all schools, government offices, and banks are closed for business. The commercial establishments will remain open.

All airports, and borders, and airports will remain open, people usually do the following:

Chinese New Year is the most important festival in China. Because the Chinese consider the Chinese New Year as the New Year’s Day according to the Chinese calendar Like Songkran, Thai New Year, Therefore, the Chinese people take this festival very seriously. And is celebrated all over the world, especially in the large community of people of Chinese descent. In which each area will have different celebrations.

Makha Bucha is an important Theravada Buddhist holiday in Thailand. It is an occasion when Buddhists go to the temple to perform merit-making activities, such as almsgiving, meditation and listening to teachings. Although Makha Bucha is a national holiday, banks and commercial centers are open. No alcohol for sale, from midnight to midnight of the holy day, meaning you cannot buy alcohol from convenience stores and bars. Pubs and bars are closed.

This is the first time to set an additional public holiday as a special case. Which today is a holiday in the North Which the government has designated as a traditional day to worship the relics of the year. It is the first public holiday added in 2021. By setting a holiday in the North To be the main holiday of the government agency As for the private sector, each operator shall consider announcing it as a holiday or not.

Chakri Day commemorates the founding of the current dynasty by its first king, Rama I. It is the founding of the Chakri Dynasty which dates back to more than two centuries when the capital city Bangkok was initially established. The day is celebrated with enormous enthusiasm in the Royal family and all the government offices, banks, and schools are declared closed. Other normal businesses open as usual and are unaffected by the celebrations.

The Songkran Festival is a time when family and friends gather to pay gratitude to elders and visit temples for prayer and offering. The Songkran Festival is an amazing event in Thailand that is used to welcome the New Year. Water is an important element of Songkran, especially in more recent times when the throwing of water has become a huge part of the annual celebrations. If you’re visiting Thailand during this period, prepare to get splashed! Appreciation of family is another important aspect of the festival, with many Thai people making their way to their hometowns to spend time with older relatives. Buddhists also visit temples throughout Songkran where water is poured on Buddha images and on the hands of Buddhist monks as a mark of respect.

Coronation Day is a day that commemorates the royal coronation. King Rama 10 of the Chakri dynasty. The government offices including immigration, labor office, and schools will be closed for business.

Visakha Bucha Day is one of the most important Buddhist holidays in the Thai calendar. It is important as it was the day of three important incidents that occurred during the life of Lord Buddha. The three significant separate events were: 1) The Buddha was born on this day. 2) The Buddha achieved “The Enlightenment” on the same day. 3) He passed away on this day (nirvana) in India.

Celebrating Visakha Bucha day means making special efforts to bring happiness to the unfortunate like the aged, the handicapped, and the sick. To this day, Buddhists will distribute gifts in cash and kind to various charitable homes throughout the country. The government offices and schools will be closed but the banks and commercial centers will remain open. No alcohol for sale, from midnight to midnight of the holy day, meaning you cannot buy alcohol from convenience stores and bars. Pubs and bars are closed.

This day commemorates the birthday of the Queen of Thailand, Queen Suthida, who was born on this day in 1978. The government, private offices, banks, and schools will be closed but commercial centers will remain open.

Asarnha Bucha Day is a public holiday in Thailand marking the day when the Lord Buddha delivered his first sermon at Benares in India over 2,500 years ago. Like many other Buddhist festivals and holidays, Asarnha Bucha is a day when Thai Buddhists will make merit and visit the local temple. The banks and commercial centers will remain open. No alcohol for sale, from midnight to midnight of the holy day, meaning you cannot buy alcohol from convenience stores and bars. Pubs and bars are closed.

Buddhist Lent Day is an important day in Buddhism. Where the monks pray that they will stay in a certain place Throughout the rainy season that is scheduled for a period of 3 months as prescribed by the Law of Discipline. Without going to stay somewhere else, this Buddhist Lent ceremony is considered a ritual for monks directly, cannot be ignored in any case.

This is a public holiday for the government offices including immigration offices and schools.

The private sector such as banks, commercial centers, and entertainment centers will remain open for business.

This day commemorates the birthday of the King of Thailand, King Vajiralongkorn, who was born on this day in 1952.

The Queen of former King Bhumibol is honored with a public holiday on her birthday. The day is also called “Queen Mother’s Birthday” as Queen Sirikit is the mother of reigning king Vajiralongkorn. This day has become the Mother’s Day celebration in Thailand.

Is the day of the death of Somdej Phra Mahidolathibesorn Adulyadej Vikram, the royal family who received the consecration of the monk by the doctor and the general public that “Father of Modern Traditional Medicine in Thailand”, Faculty of Medicine Siriraj Hospital has dubbed This day commemorates this important “Mahidol Day” to pay homage. And show gratitude to His Majesty because of the royal duties that have been practicing in the medical community And public health in Thailand.

It is a tradition of the people of southern Thailand who have been influenced by their beliefs. Which comes from the Brahmin religion With a combination of Buddhist beliefs Which came later with an important purpose as a charitable dedication to the deceased ancestors. Which is believed to have been released from the abyss that he was imprisoned due to the retribution he had committed while he was still alive To the human world The purpose is to ask for merit from the children, relatives, relatives who have prepared dedication to Express gratitude to the deceased After that, he will return to the landscape of Hell.

This day commemorates the passing of King Bhumibol or Rama IX on October 13th, 2016. This national holiday in Thailand is held annually on 13 October. It is a public holiday for the general population, and schools and most businesses are closed.

End of Buddhist Lent Day It is a day that allows monks to admonish each other. In the offense of the offense during the rainy season(3 months) together On this end of Buddhist Lent Day, the activities that villagers often do are Doing merit-making, such as making merit, giving alms to monks, arranging flowers, incense, and candles to worship the monks at the temple. And listen to the sermons.

Chulalongkorn Day, celebrated annually on 23 October and usually observed by all companies and organizations, commemorates the passing of King Chulalongkorn or Rama V, who died on this day in 1910. Known as the country’s modernizing monarchy, the abolition of slavery in Thailand is considered among his greatest achievements.

This holiday commemorates Thailand’s adoption of a constitutional monarchy in 1932. Constitution Day is traditionally celebrated across Thailand by displaying and paying respect to portraits of Thai kings past and present; it is also common for government offices to be lit up and for civilian and military parades to take place.

In preparation for the New Year celebrations both the government offices, schools and private offices will be closed for business. Commercial and entertainment centers, public transportation, and airports will remain open. The Thai immigration at the airport, seaport, and land border will also be open as usual.